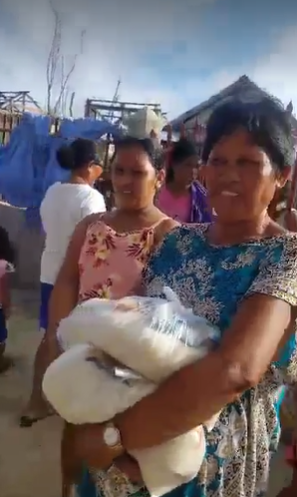 The video is hard to watch without getting emotional.

In it, dozens of neighbors gather at the Siargao Island home of my in-laws, one of the few left standing in the wake of last month’s Super Typhoon Odette. As a relative unloads bags of rice from a parked mini cab, the crowd can barely contain its growing excitement.

“Salamat karadjao!” several exclaim, expressing gratitude in their native tongue. Then, after hoisting a bag onto her sagging shoulder, a middle-aged woman tries it in English. “Thanks very big!” she says, grinning broadly before disappearing into the crowd. And that’s when the tickle in my throat becomes a lump that threatens to explode.

Friends and relatives here in America sowed the seeds of that lump. It began with our description on Facebook of the recent climatic calamity in the Philippines. Without our even asking, people immediately started contributing what they could. The bottom line: nearly 165,000 pesos—more than $3200—collected in just a few days. And so, some residents of my wife’s birthplace will have plenty to eat, at least for a while.

That wasn’t the only help to pour in. An online group comprising Ivy and several others from that same neighborhood—a previously charming little barangay called Caridad—raised enough to buy several solar panels, solar-powered streetlamps, and a diesel generator for their hometown. Thus at least some residents will have access to electricity during the long months likely to pass before state workers can repair thousands of downed and disabled power lines.

Many other friends in Siargao and Surigao City—most of them struggling themselves—organized fundraisers, as did people from various locations worldwide. And, of course, there was help from government entities, both in the Philippines and abroad, as well as several international nonprofits.

All of which has helped renew my faith in the basic goodness of humankind.

That faith also seems to be spreading in Surigao City where the typhoon destroyed nearly 24,000 homes and damaged another 19,500, including our own. “The survivors’ ability to take misfortune lightly and see the brighter side of things indicates a resilient attitude that bodes well for their eventual recovery,” the Philippine Daily Inquirer reported in a story headlined “Surigao folks see hope in New Year amid typhoon ruins.”

And yet moments of despair remain. On New Year’s Day, I viewed a videotaped greeting from my sister-in-law bearing pictures of our once-sterling living room overlooking Surigao Strait. It’s still beautiful and, thank God, mostly intact. But above her smiling face gaped a giant hole dangling torn electrical wiring from the ceiling. And a corner once graced by my favorite hand-carved wooden sculpture now offers only wide-open space.

“Geese,” I muttered to my dear patient wife, “I kind of forgot about all the damage.” Tomorrow, the civil engineer who helped build our house will assess its condition, beginning with a tattered roof and shattered windows. The original art and family heirlooms destroyed inside, of course, we can never recover or replace.

Through it all, though, I am succored by the knowledge that it could have been oh so much worse. Just this morning, a grim television news story jerked me out of a forgetful and pleasant sleep. A wildfire in Colorado had destroyed nearly 1,000 homes and 6,000 acres. “Unfortunately for myself and the neighbors,” a distraught father told Channel 9, “all the houses on [our street] are burned down to cinder blocks in the basement. We are a little devastated. I hope that nobody has been killed… because lives are more important than physical structures that we can replace.”

To which I offer a heartfelt amen.