Underground-turned-Mainstream Journalist Loses His Soul and Finds it Again 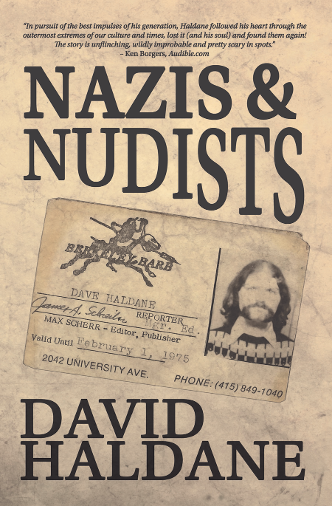 Ever wondered what it’s like to get so lost in the nether regions of an era that you can barely find your way home? Journalist David Haldane tells you with verve and humor in his new award-winning memoir, Nazis & Nudists, published by Black Rose Writing. The book is aimed at baby boomers, would - be counter culturists, news reporters, their audiences, history buffs and anyone who’s ever struggled toward the light or appreciates the gripping tale of someone who does.

Haldane eventually achieved salvation the way increasing numbers of American men do these days; by finding love via the Internet on a distant and exotic Philippine island. En route to marital bliss, however, he traversed some rocky terrain from the cluttered newsroom of the Berkeley BARB to the disintegrating halls of the Los Angeles Times in its waning days. He also encountered such iconic purveyors of the time as a grandfatherly Walt Disney, a young bodybuilding Arnold Schwarzenegger, Charles Manson’s lawyer who got murder ed for his troubles, Timothy and Joanna Leary at the gates of hell, a famous beatnik’s ghost on the railroad tracks, American terrorists with stolen identities fixing to take down the country and Bernie Sanders as a young mop - haired politician cursing at t his own image on the screen.

“The story follows the arc of an era,” Haldane says. “ It will interest baby boomers, their younger siblings who wished they were there and their children and grandchildren who are glad that they weren’t.” 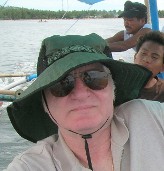 David Haldane’s career in journalism has spanned more than four decades, beginning as an underground reporter for the Berkeley BARB and culminating in twenty-three years as a Los Angeles Times staff writer. Currently he divides his time between homes in Joshua Tree, California, and Northern Mindanao, Philippines, where he and his Filipino wife built the dream house envisioned in his book. In addition to writing occasional magazine articles, Haldane produces a weekly newspaper column called “Expat Eye” for Mindanao Goldstar Daily and was awarded a 2018 Golden Mike for his work as a reporter and weekend news anchor for KCDZ 107.7 FM in Joshua Tree. His work has appeared in many publications worldwide, including Los Angeles Times Magazine, Orange Coast, Islands, Penthouse and Salon. It has been anthologized in two previous books.

Nazis and Nudists may be of particular interest to denizens of Berkeley, Vermont and New York where much of the action occurs. It is available nationwide at Black Rose Writing, Amazon or Barnes & Noble.