Back to the Barricades 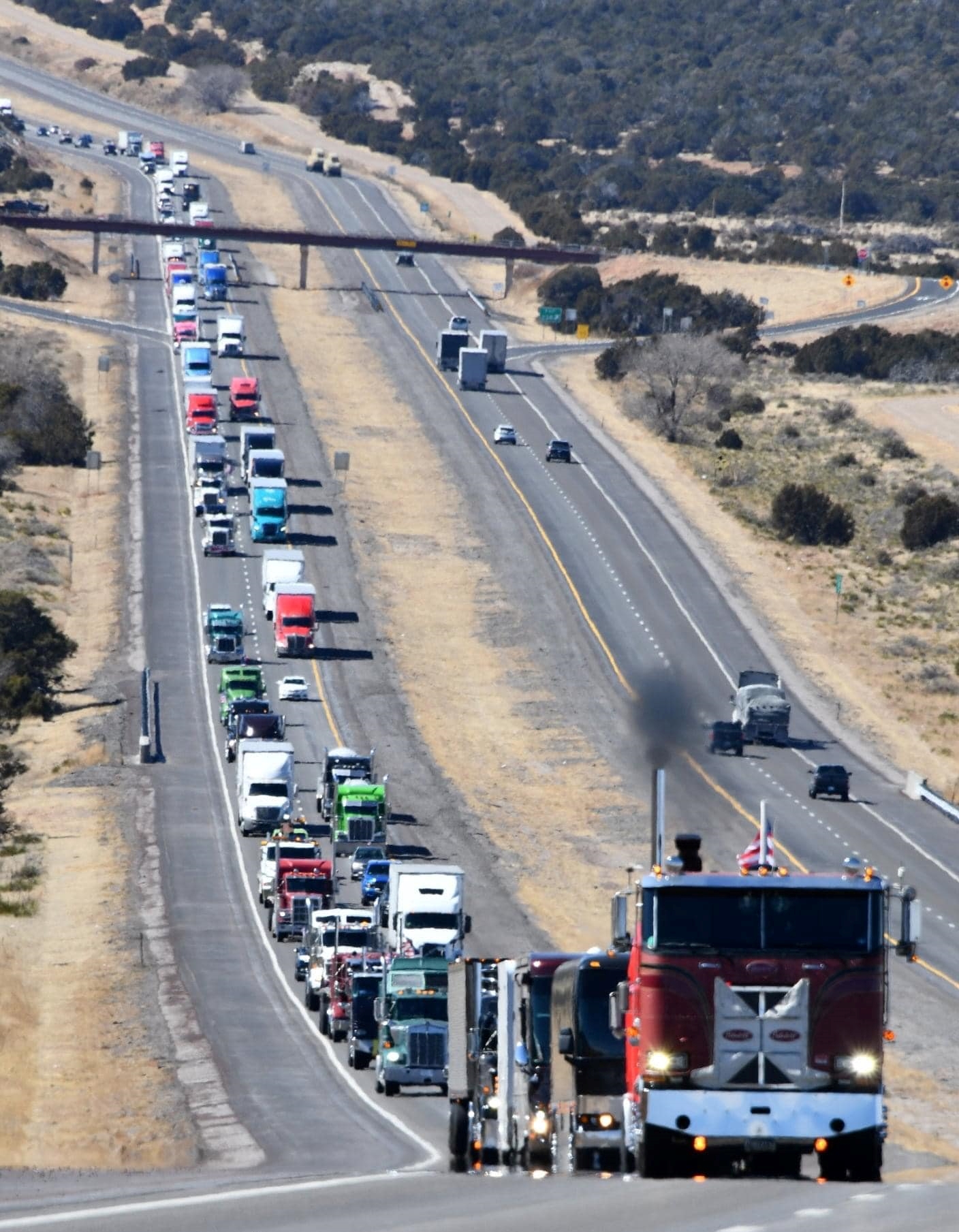 There were more flags than I’d seen in a while.

American, Canadian… plus a few particularly suited for this colorful occasion. Like the one bearing the slogan “Freedom Isn’t Free.” And the historic yellow banner of the American Revolution depicting a coiled rattlesnake over the words, “Don’t Tread on Me.”

“It’s all about freedom,” declared Ron Coleman, speaking from the cab of his Kenworth big-rig truck.

He was referring to last week’s departure of the People’s Convoy truck caravan from a parking lot in Adelanto, California. Its destination: Washington D.C., where government officials expect several hundred vehicles to arrive this weekend. The message: end all COVID-19 mandates and re-open the country.

“There’s been way too much government overreach,” said Coleman, 62. “This is the beginning of the sleeping giant awakening.”

Organizers say the recent Canadian Freedom Convoy to Ottawa inspired its American counterpart. Acting like what the Wall Street Journal later dubbed a “tin-pot dictator,” Canadian Prime Minister Justin Trudeau refused to meet with the truckers, accused them of being a Nazi-sympathizing “small fringe minority” harboring “unacceptable views”, went into hiding for more than a week, declared what amounted to martial law, and sent in police who made nearly 200 arrests.

American convoy organizers are hoping for a better reception. Describing their caravan in a press release as a “peaceful and law-abiding transcontinental journey,” they say they intend to “abide by agreements with local authorities.” Their protest, they say, is a “non-partisan effort supported by a cross-cultural and multi-faith consortium of organizations,” including “people of all colors and creeds.”

Yet the response so far has been far from friendly. The U.S. Defense Department almost immediately approved the deployment of 700 additional National Guard troops to protect the Capitol. Police are busy constructing a fence around Capitol grounds to keep out unwanted protesters. And the New York Times, in all-too-predictable coverage, published an article aimed at discrediting the convoy’s message by emphasizing some of its supporters’ alleged ties to “far right” elements responsible for the so-called insurrection of Jan. 6.

“Many of those behind the demonstration…” the paper claimed, “have connections to the violent attack on the Capitol in January 2021 or supported the lie that fraud in the 2020 presidential election was to blame for Donald J. Trump’s loss.”

Downplaying the convoy’s importance, the Times went on to note that “At truck stops in the surrounding area, most local drivers seemed only dimly aware of the California convoy or were too busy to take part. Unlike Ottawa, where a recent weeklong protest shut down parts of Canada’s capital, the activity near Barstow, California… seemed highly staged, with memorabilia and food trucks.”

Participants gathering in Adelanto last week said they were fine with the abundance of food. In fact, Coleman said, the homemade cookies gifted by supportive sympathizers had touched him deeply. “I got so many that I’ll never eat another cooky again,” the trucker joked.

Then he pulled out a large card inscribed in crayon that he said had brought him to tears. “Thank you, truckers,” it read in the childish scrawl of the young girl who’d penned it. Using the red symbol of a heart to accentuate its meaning, the card drove home the point. “We love you,” the little girl had written. Then, in all caps: “FREEDOM.”

“That’s all I need,” Coleman whispered, “to get me to Washington.”

Click here to get “Expat Eye” weekly by email

David Haldane’s poignant memoir, “Nazis & Nudists,” recounts growing up in countercultural California to eventually find a bride in the Philippines. A former Los Angeles Times staff writer, he is an award-winning journalist, author and radio broadcaster currently dividing his time between homes in Joshua Tree, California, and Northern Mindanao, Philippines, where this column appears weekly in the Mindanao Gold Star Daily.