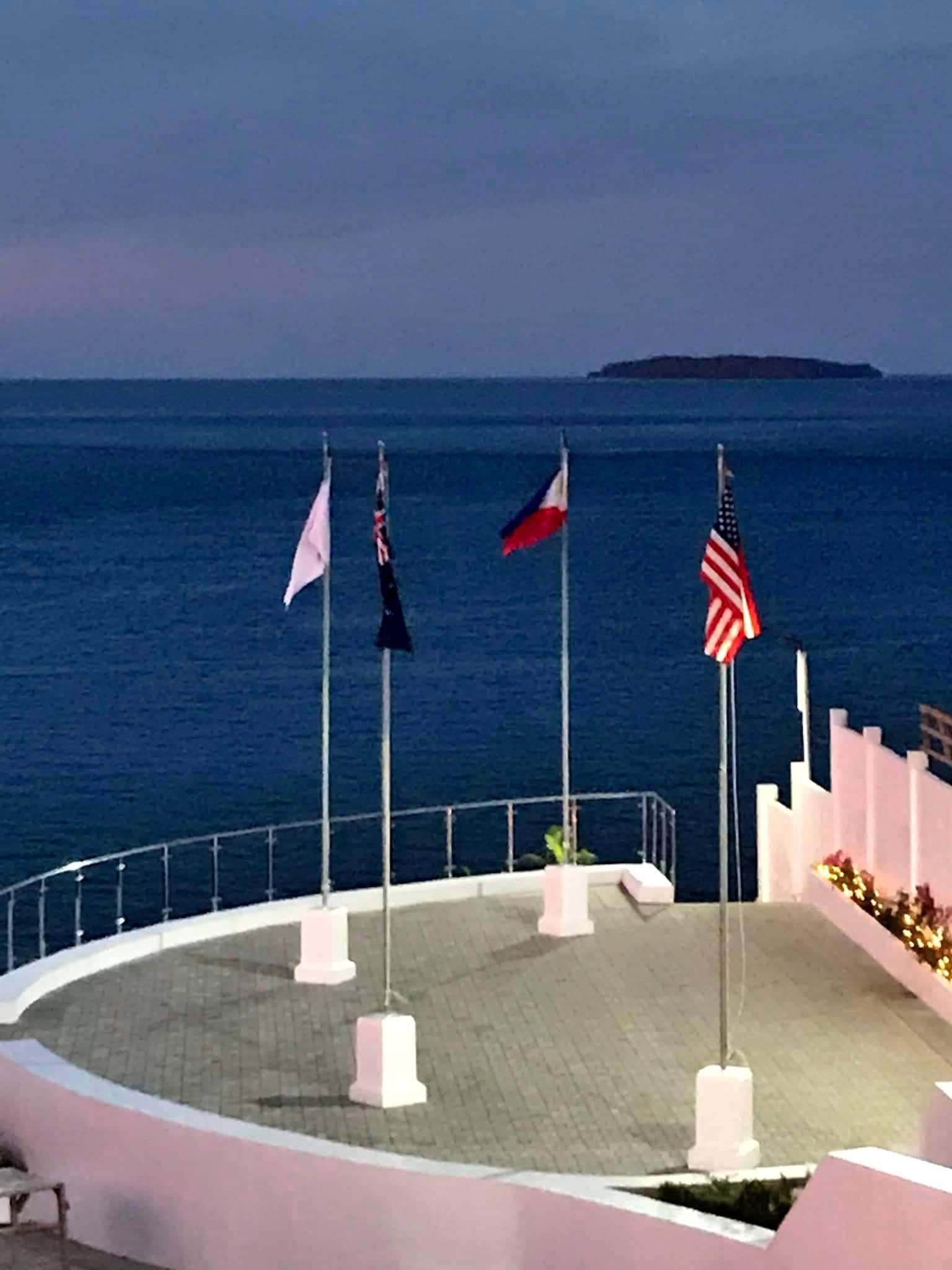 There was an unholy racket near my house the other night. Wait, I’m exaggerating; it was more like a rather loud buzz.

Buzzes, of course, are among those things in life that are often ill-defined. They can be very bad like, say, the buzz of a saw cutting through your fence or the buzz of a bee headed toward your neck. Or they can be positive, like the buzz of good news.

The buzz I’m talking about was more like the latter; the buzz of excitement over something new in Surigao City. I didn’t know that right away, of course. No, in order to find out I had to venture across the street to the recently completed Battle of Surigao Strait Memorial.

As I’ve written before, it’s a monument to the brave men of four nations – America, Australia, Japan and the Philippines – who fought an epic naval battle there seventy-five years ago tomorrow. By there, I mean the wide expanse of ocean directly opposite the memorial and my house. By tomorrow, I mean October 25, when I will be arising at 4 a.m. to honor the battle’s dead.

My account of that experience will have to wait for a future column. Today, though, I want to tell you about the buzz;
a noise that, I don’t mind saying, honestly left me surprised. It’s no exaggeration to say that there were literally dozens of people coming and going from late afternoon until early evening. Being the inveterate reporter that I am, of course, I couldn’t resist walking down there to see what, exactly, the buzz was about. And what I saw was inspiring; entire families taking selfies in front of, well, a memorial.

“How do all these people know about this?” I asked City Mayor Ernesto U. Matugas, Jr., who was standing in the middle of the crowd sporting a huge smile.

As it happened, the city’s Supervising Tourism Operations Officer, Roselyn B. Merlin, was standing right next to him. “It used to be so quiet here,” she offered, “but it won’t be anymore.”
“Yup,” I said, “I guess we’ll just have to adapt.”

In fact, it’s the kind of adaptation I welcome, and here’s why. In the roughly fifteen months since I moved to the Philippines, God only knows that I’ve experienced lots of kindness and good will. I’ve also noticed at least one thing rather disturbing; the general lack of knowledge, or even interest, in history among the nation’s youth.
The Philippines, for sure, doesn’t have a monopoly on this trend; in my own home country of the USA, I’m sure, there’s at least as much ignorance and perhaps a bunch more. But there I stood, watching teenagers – let me repeat that, teenagers – getting excited over an historical monument.

I’m guessing that most of them know little about the battle it commemorates. They probably don’t know, for instance, that it was the last great naval battle, not only of World War II, but of history itself. Or that the Allied victory turned the tide of the war in the Pacific, paving the way for their country’s liberation from the occupying Japanese. They may not even be aware of the thousands who died in that battle.

But there I was, standing at a monument overlooking the sea in the shape of a battleship heading north. Back astern where the bridge would have been, sat a small museum full of artifacts from the battle. And on the front deck near the bow, I could see a flagpole for each of the four participating nations.
This morning, during what appeared to be a rehearsal for the big day, I was honored to see those nation’s flags hoisted aloft on those poles for the very first time. And as the sound of a solo trumpet playing taps wafted through my front door, I couldn’t help but hope that those teenagers will come to understand what this monument is all about.

Even after the buzz has gone far away.