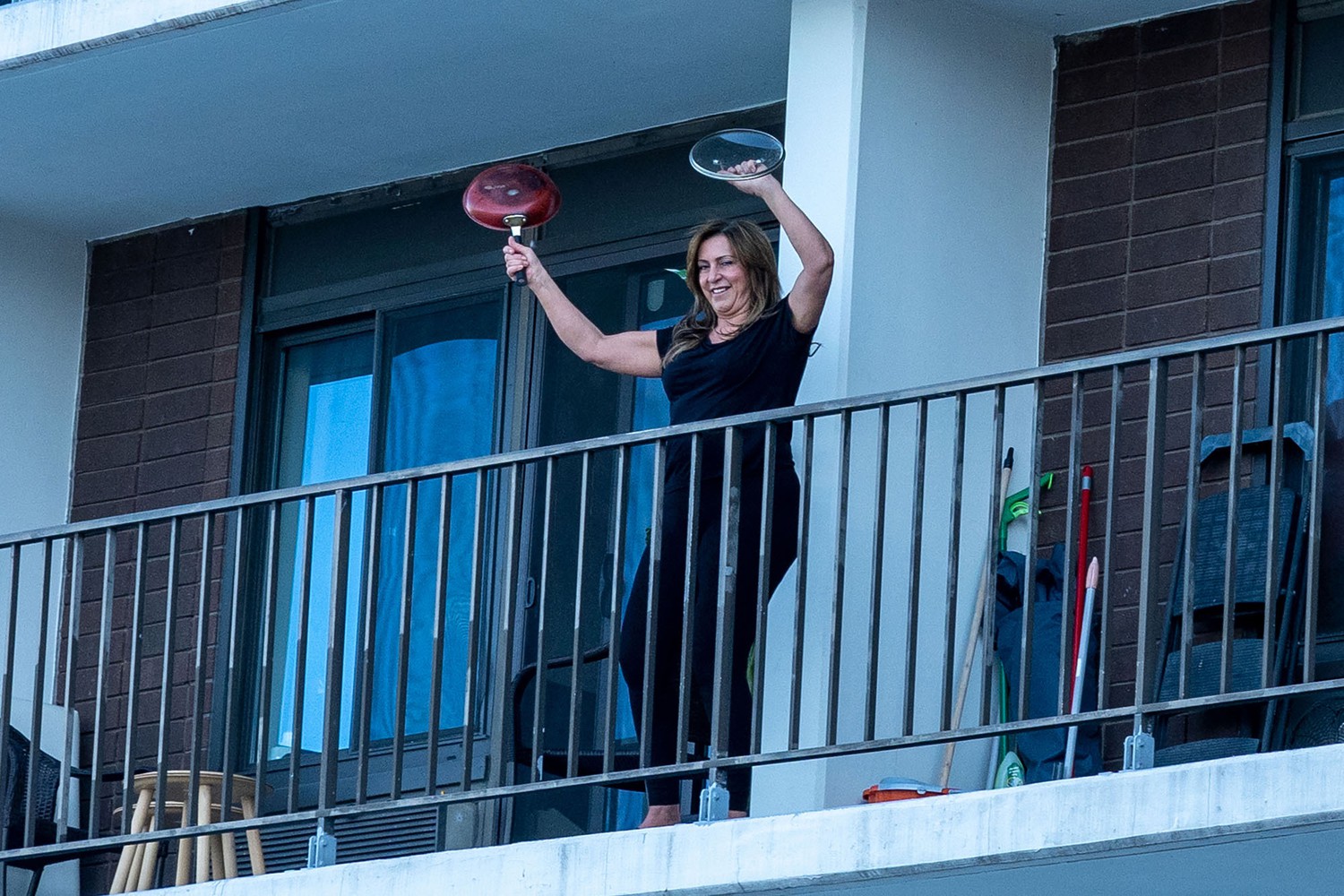 ASTORIA, UNITED STATES - MARCH 21, 2020: A resident at the Shore Towers Condominium sings on the balcony to make people feel united in the quarantine as the coronavirus continues to spread across the United States. Fears of the Coronavirus (COVID-19) have spiked with an extreme demand to protect against respiratory transmission. The World Health Organization declared coronavirus (COVID-19) a global pandemic on March 11th.- PHOTOGRAPH BY Ron Adar / Echoes Wire/ Barcroft Studios / Future Publishing (Photo credit should read Ron Adar / Echoes Wire/Barcroft Media via Getty Images)

That’s how long I spent on Facebook Messenger the other day, chatting affectionately with a long-lost friend in California. We hadn’t done that in ages. The reason we can do it now is because both of us are immobilized at home, hiding out from a virus that could kill us and millions of others.

I’m not saying that this disease is good; my heart bleeds for those everywhere who have died, been stricken or otherwise negatively impacted by this vile bug that has no conscience and shows no mercy. But here’s the thing; the blood I’m bleeding is red, same as everyone else’s. And maybe, just maybe, therein lies the hidden lesson – a kind of salvation, if you will – that this painful time will leave in its wake; the realization that we all bleed red.

We’ve already seen some evidence of that. There are, of course, numerous examples of friends and families coming together in this era of uncertainty. My own daughter in Portland, Oregon, tells me that, working from home, she’s relishing the long days spent with her husband and three-year-old daughter; family bonding time that was heretofore rare. Personally, I find myself slowing down a great deal to “smell the flowers” as-it-were; taking the time, in other words, to notice and appreciate the blessings all around me. And, whenever possible, we have begun opening, not only our hearts but our wallets, to friends and family in need.

There remains, of course, the usual social and political rancor to which all of us have become accustomed. Back in the United States, those who dislike President Trump criticize him for spreading ethnic slurs by dubbing this new disease the “Chinese virus,” while here in the Philippines President Duterte’s detractors accuse him of doing the opposite; tempering his early response to honor his affection for China. And yet, just beneath the surface of that tumultuous ocean of conflict, one can see the faint signs of a timid and tentative awakening.

The lead paragraph of a recent story in this newspaper reported that “warring politicians in Cagayan de Oro and Misamis Oriental have…opened communication lines for…coordinated actions against the spread of Covid-19.” A few days ago, I was shocked to read that Ilhan Omar, a Muslim member of the U.S. House of Representatives and one of Trump’s harshest critics, had praised him for his “incredible and…right response in this critical time.” And last week – perish the thought – President Duterte declared nothing less than a unilateral ceasefire with the armed Communist rebels fighting throughout Mindanao and the Philippines. Why? To allow the unimpeded movement of health workers and medical supplies across the areas in which they thrive.

This new sense of common purpose may even be penetrating national boundaries. In the earliest days of the pandemic when the Chinese government was still playing coy regarding its full implications, videos began permeating social media showing masked Chinese health workers broadcasting the unabashed truth to their foreign neighbors. Saudi Arabia’s leaders are said to be talking to other world figures about convening an unprecedented virtual G20 summit to formulate a coordinated response to the crisis at hand. And in a symbol of environmental healing, dolphins and swans – yes, those mystical creatures of the sea and sky – have been sighted in the otherwise deserted canals of Venice, Italy.

Ah, but for me the most enduring image of this troubled time will be that of a bearded young pianist playing the theme from “Titanic” on the balcony to which he’s confined while, all around him, neighbors raise their voices in song from  their own private perches above the empty streets of Madrid.

Such scenes are difficult to watch without tears of commiseration and a strange kind of joy. One can’t help noting, of course, that the song he played comes from a movie about a ship that ultimately sank. We can only hope that this one doesn’t. And, when its holes are finally plugged, we can pray that there remains some semblance of memory regarding the hard yet hopeful lessons of the vessel’s near demise.

David Haldane is the author of an award-winning memoir called  “Nazis & Nudists.” A former Los Angeles Times staff writer, he is an American journalist, author and radio broadcaster who recently moved to Mindanao with his Filipino wife and their nine-year-old son. This column is the unfolding story of that great adventure. http://felixr28.sg-host.com.)