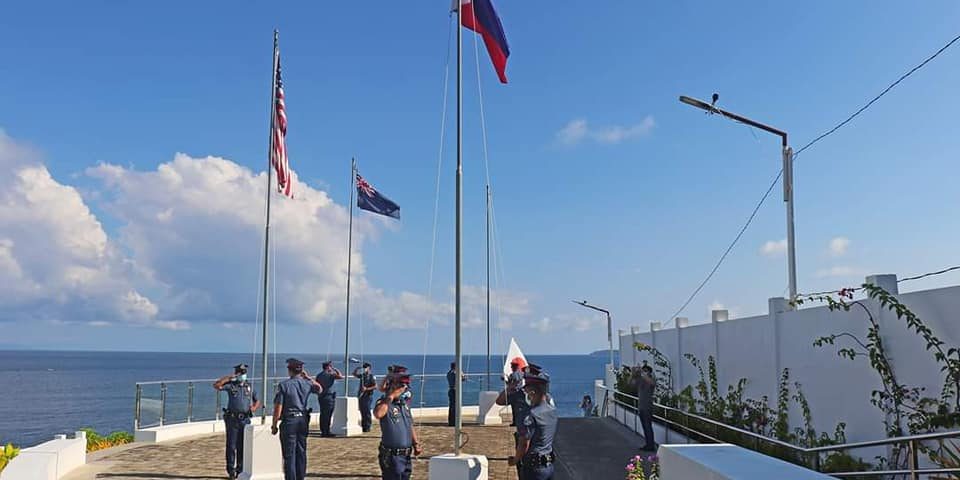 I have never been an early riser.

Where I live, mornings are like hell on earth filled with the damnable interruptions of people, including my own nine-year-old son, who actually have important morning tasks to perform and significant locations at which to perform them. My usual routine is to grit my teeth, offer some semblance of a mumbled good luck and farewell, and then – soon as the coast has cleared – let my eyes droop shut again until much later when some vague dreamland shadow beckons me cautiously forth for that tentative sip of my first morning coffee.

On a recent Tuesday all that changed.

In most respects, it was like any other weekday; the dogs were barking and the roosters crowing as the kids got ready for school. Ah, but there was one significant difference; scheduled on this particular Tuesday was the first official flag raising ceremony at the new Battle of Surigao Straight memorial directly across the street. Which meant that my ordinarily placid dream routine would be interrupted by a chorus of bugles at eight a.m. sharp! And that’s how something seemingly impossible came to pass; mounting a heroic struggle against my baser instincts I, like Jesus, arose from the dead. Boy, am I glad that I did!

Had my house been standing at its current location on the morning of October 25th, 1944, with you relaxing on its veranda sipping a glass of wine, you’d have witnessed an extraordinary event. In fact, you’d have witnessed it even without the wine; the historic Battle of Surigao Strait, an epic World War II naval clash that turned the tide of war in the Pacific and paved the way for the Philippines’ liberation from Japan. Described as history’s last major faceoff between opposing battleships, the event is seen by some as America’s ultimate revenge for the attack on Pearl Harbor just three years before.

We didn’t know any of this when we purchased our property back in 2013. You can believe that we started hearing about it soon, though, mostly from one Jake Miranda – retired Philippine Navy diver, local mover-and-shaker and World War II history buff – who started bending our ears about his dream of creating a monument overlooking the place where all of it happened.

OK, fast forward to 2020; Jake’s dream has become a reality. And not only that; in the four months since it opened to the public, the so-called BOSS memorial and museum has become the hottest tourist attraction in Surigao City! Which brings us to those darn flags.

There are four of them, one for each of the great nations that participated in the event; America, Australia, the Philippines and Japan. The memorial is open every day but Monday. So, beginning last week, the plan was to hoist them aloft at eight a.m. each Tuesday and put them to bed every Sunday at five.

Recently, standing at attention for the first official flag raising ceremony on that beautiful perch overlooking Mindanao’s gate, I was struck by how different those national anthems sound. Australia’s is young, optimistic and proud; America’s historic, grateful and proud and the Philippines’ majestic, spiritual and, yes, proud. Only Japan’s national anthem sounds like a funeral dirge.

Later, reflecting on what had happened seventy-five years before, that seemed only fitting. For this place, after all, is the watery grave of several thousand sailors – mostly Japanese – who died on that long-ago October morning. And just as their ships once guarded the gates of Mindanao, I like to think of their souls now guarding the gates of my house.

The least I can do is sacrifice a bit of sleep each week in their honor.