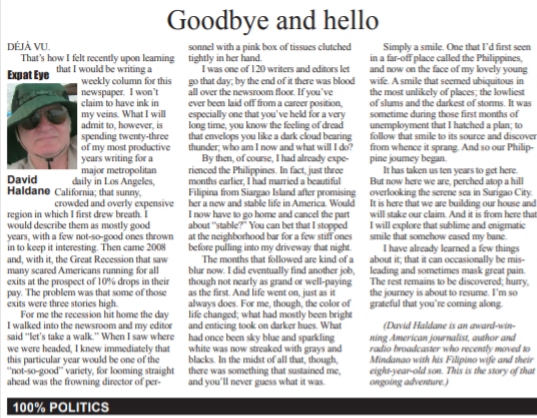 That’s how I felt recently upon learning that I would be writing a weekly column for this newspaper.  I won’t claim to have ink in my veins. What I will admit to, however, is spending twenty-three of my most productive years writing for a major metropolitan daily in Los Angeles, California; that sunny, crowded and overly expensive region in which I first drew breath. I would describe them as mostly good years, with a few not-so-good ones thrown in to keep it interesting. Then came 2008 and, with it, the Great Recession that saw many scared Americans running for all exits at the prospect of 10% drops in their pay. The problem was that some of those exits were three stories high.

For me the recession hit home the day I walked into the newsroom and my editor said “let’s take a walk.” When I saw where we were headed, I knew immediately that this particular year would be one of the “not-so-good” variety, for looming straight ahead was the frowning director of personnel with a pink box of tissues clutched tightly in her hand.

I was one of 120 writers and editors let go that day; by the end of it there was blood all over the newsroom floor. If you’ve ever been laid off from a career position, especially one that you’ve held for a very long time, you know the feeling of dread that envelops you like a dark cloud bearing thunder; who am I now and what will I do?

By then, of course, I had already experienced the Philippines. In fact, just three months earlier, I had married a beautiful Filipina from Siargao Island after promising her a new and stable life in America. Would I now have to go home and cancel the part about “stable?” You can bet that I stopped at the neighborhood bar for a few stiff ones before pulling into my driveway that night.

The months that followed are kind of a blur now. I did eventually find another job, though not nearly as grand or well-paying as the first. And life went on, just as it always does. For me, though, the color of life changed; what had mostly been bright and enticing took on darker hues. What had once been sky blue and sparkling white was now streaked with grays and blacks. In the midst of all that, though, there was something that sustained me, and you’ll never guess what it was.

Simply a smile. One that I’d first seen in a far-off place called the Philippines, and now on the face of my lovely young wife. A smile that seemed ubiquitous in the most unlikely of places; the lowliest of slums and the darkest of storms. It was sometime during those first months of unemployment that I hatched a plan; to follow that smile to its source and discover from whence it sprang. And so our Philippine journey began.

It has taken us ten years to get here. But now here we are, perched atop a hill overlooking the serene sea in Surigao City. It is here that we are building our house and will stake our claim. And it is from here that I will explore that sublime and enigmatic smile that somehow eased my ban

I have already learned a few things about it; that it can occasionally be misleading and sometimes mask great pain. The rest remains to be discovered; hurry, the journey is about to resume. I’m so grateful that you’re coming along.

David Haldane, a former Los Angeles Times staff writer, is an award-winning American journalist, author and radio broadcaster who recently moved to Mindanao with his Filipino wife and their eight-year-old son. This column is the ongoing story of that adventure.