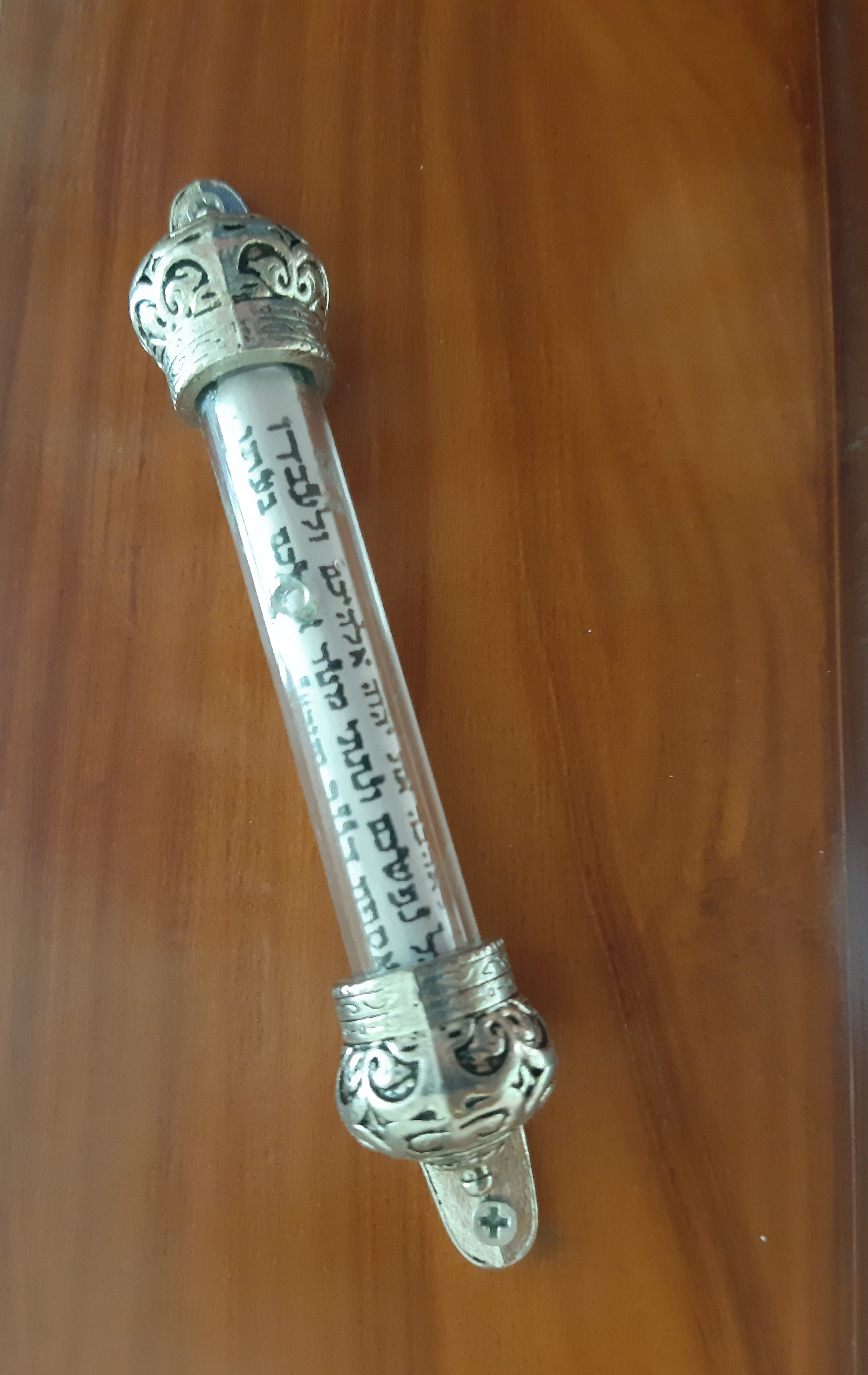 My only moment of uncertainty came when the priest sprinkled holy water onto our door.

There, mounted firmly inside the frame, hung a tiny Israeli scroll bearing Jewish prayers in clear Hebrew script. It was an important icon of my glimmering Jewish heritage; would it hiss and explode when touched by the sacred moisture about to be imbued by this Catholic man of Jesus? Would hot steam fill the room as the flames of Hell burned our new house to the ground?

Appreciating my anxiety requires some background. The scroll in question is called a mezuzah, a Hebrew word literally meaning “doorpost.” A small vessel containing the Shema Yisrael, Judaism’s most central prayer and declaration of faith, it is traditionally placed at the entrance of Jewish homes in fulfillment of God’s Biblical instruction to write “these words which I command you…on the doorposts of your house and on your gates.” The idea, in other words: to invite the Lord into your home to bless it and protect you.

Clearly not a bad idea, especially for a non-observant Jew such as myself living in a largely Catholic country with his Catholic wife and young Catholic-in-the-making son. Heck, there’s even a future Catholic simmering, as we speak, in her mommy’s growing womb. So you can imagine my urgent determination to make things right with Moses and the Tribe.

When I say I’m non-observant, I don’t mean unbelieving. In truth, I have what I consider a personal relationship with the deity, however one chooses to define Him or Her. For me, it largely has to do with feeling the presence of something larger than myself; an experience most pronounced, I’d say, in communion with life’s miracles such as nature, art, kindness, heroism or the birth of a child. Indeed, it is ultimately that presence which provides the joy, hope and, yes, love that propels me forward.

What I don’t find lots of use for, on the other hand, is the formal public ritual associated with much of organized religion, whatever its brand. So, while I am proud to be identified as a Jew, in my case the identity has more to do with culture and values than with any specific practice or belief. Which is why I have no problem allowing my children to be raised Catholic. And also why it was important, not only for me but for them, to put a mezuzah in our house.

We did it ourselves, mainly because there wasn’t a rabbi within 700 kilometers. After securing an artful Israeli-made mezuzah during a trip to the U.S. last year, we simply instructed our favorite handyman to affix it to our door. Then, as he looked on in bewilderment, recited the appropriate Hebrew blessing conveniently downloaded from Wikipedia.

Ah, but now – after several years of construction – it was time to honor the other half of our mixed religious and cultural heritage; the traditional Catholic/Filipino blessing of a brand-new home. The event is considered essential in the Philippines, the main attraction being the priest’s blessing during which – after reciting the appropriate prayers – he makes a tour of the place, sprinkling holy water in every nook and cranny. Then you throw a big party for your family and friends featuring lots of lechon and – you guessed it – a whole lot to drink.

To get to the party, though, we had to make it past that darn door. As you may recall from your Bible studies, while relations between Judaism and Catholicism tend to be fairly stable these days, there is still that ancient – and historically sometimes virulent – disagreement over the minor matter of whether Jesus is Lord. Which is why it seemed prudent to hold my breath as the priest somberly prepared to administer his holy spray. Earlier I had pointed out and explained the significance of the tiny Jewish arc in the doorway, only to be met by uncomprehending stares. Now I silently shut my eyes as the man in the white robe gingerly sprinkled his water on that blatantly unchristian doorpost.

A few seconds passed, and then….nothing. No hiss, no crackle, no fire, no tear; miracle upon miracle, our house was still there!

All of this leads me to conclude that God, whatever you call him, smiles on our little union of culture, nation and faith here on this hilltop in Punta Bilar.

For which I must thank both Him and my lucky star.