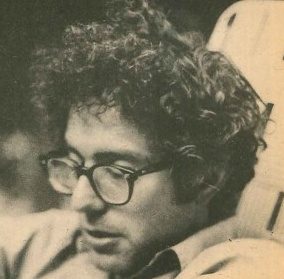 I can’t swear it was the first time he ever saw himself on TV, but it certainly seemed that way.

The year was 1972 and I was sitting on a couch next to Bernie Sanders – the current Democratic frontrunner in the race for U.S. president – in the living room of the apartment he then occupied in Burlington, Vermont. We had just spent two long hours discussing the issues of the day and were now waiting breathlessly in front of his television set for the commencement of a pre-taped gubernatorial debate.

“Anyone want a smoke?” inquired a long-haired guy seated on Bernie’s other side, “the program should start in a flash.”

The day’s adventure had been inspired by a letter to the editor of the Vermont People’s Voice, an alternative leftist publication at which I was just then beginning my journalism career. The monthly paper was based at Goddard College in nearby Plainfield, where I was a student and where Bernie, earlier that year, had kicked off his first political campaign; an unsuccessful Liberty Union bid for U.S. Senate. Now he was making a stab at becoming the governor of Vermont.

But very few people had ever heard of him, least of all me. His letter – described in the introduction to the piece I later wrote as “from a young man who identified himself as Bernard Sanders” – invited our coverage, so the editor had sent me to do a Q and A. Now, however, that debate was starting, and all eyes were glued to the set.

On it could clearly be seen the race’s three candidates, including an unkempt mop-haired Bernard Sanders. For a moment we all stared in silence as the hippie on the tiny screen made his opening statement while brushing dark delinquent locks away from his thick black Clark Kent glasses. Then, suddenly, I heard the outburst I would never forget.

“He looks like the village idiot!” screamed the real Bernie, jumping to his feet and shaking a fist at the screen. “I would never vote for a bum like that!”

In the end, not too many people did; the final tally netted him 2,175 votes, about 1.1 percent of the total cast. But, as everyone now knows, it was only the second of many runs to come. And Bernie’s comic self-deprecation eventually evolved into fabulously successful self-promotion.

Years later, reading the interview I did with him that day, I was struck by the fact that it could have been given in 2020. “People got to get off their asses,” Bernie had railed. “The main problem is that too much power rests with too few people [and] you can’t talk about power without talking about the concentration of wealth.”

“The planet is a finite body,” Bernie said, “and you can’t keep on developing it indefinitely. We don’t need more and more factories producing nonsense. Maybe we don’t need a 40-hour work week any longer.”

Oh, and in Vermont? Ban those rich out-of-state interlopers whose investments had driven prices up.

Here’s the thing; none of that seemed so radical at the time. The reason it didn’t, though, was because I – and pretty much everyone I knew, including Bernie – was  part of a radical youth counterculture basically hostile to America and friendly to socialism. I was even a card-carrying member of the Young Socialist Alliance, the youth wing of the Socialist Workers Party with which Bernie later became affiliated. And he was definitely down with the broader movement’s pseudo-enviro-spiritual lingo; “The environmental problem,” he rapped, “is definitely related to the economic one. Redistribute the wealth and let’s live; when people lose harmony with nature, there’s not much else.”

What made him unusual, in fact, wasn’t what he was saying but that he was saying it in a televised gubernatorial debate. Which is probably why my article appeared under a headline asking whether Bernie was A New Kind of Candidate?

None of us thought he could actually win, of course, nor did we care; we were, after all, revolutionary counter-cultural warriors creating a new world with little resemblance to the old. What happened instead is what most people call growing up; we got jobs, families, lives, incomes, mortgages and, in my case anyway, conservative.

But Bernie stayed the same. He is still a new kind of candidate. Only now he’s speaking to millions worldwide instead of a few wide-eyed longhairs in his tiny cramped apartment.

Just how that happened may be the story of the century.