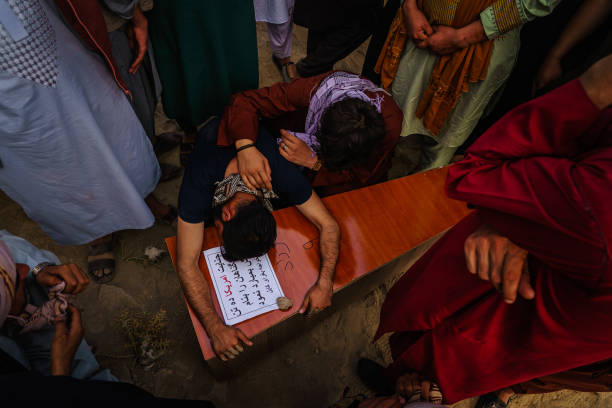 KABUL, AFGHANISTAN -- AUGUST 30, 2021: A relative throws himself and weeps over the casket of Farzad, 12, who was killed by U.S. drone airstrikes, according to the family, in Kabul, Afghanistan, Monday, Aug. 30, 2021. (MARCUS YAM / LOS ANGELES TIMES)

The line in the newspaper wrenched my gut.

“Sitting on a pile of sandbags outside the family compound,” the LA Times reported, “Ahmadi’s other brother, Ramal, could barely speak through the grief of having lost three children in Sunday’s explosion; Binyamin, 5; Arwin, 3; and Aya, just 1 ½.”

I too have a 1 ½-year-old daughter. And just the thought of her lying torn to pieces in a bloody pile of debris is almost more than I can bear. So I can’t even imagine the pain this poor father must be suffering.

Tucked on an inside page under the headline “Family says US killed 7 children,” the story describes the only publicly confirmed victims of an American drone strike said to have vaporized a car full of Afghan terrorists about to attack the Kabul airport. An earlier terrorist attack just days before had killed at least 170 people, including 13 American service members.

The US has yet to identify the terrorists it allegedly dispatched to paradise. Well documented, however, are the identities of ten dead members of an innocent Afghan family that accidentally got in the way. “After a day at work, Zemari Ahmadi was just arriving at his home Sunday,” the paper reported, “when calamity struck. In an instant, 10 people were killed, including no fewer than seven children… Among the dead were Ahmadi, 40, who the family said worked for a Southern California-based charity; a 25-year-old nephew who was about to be married; and five kids who were 5 or younger.”

For the first time in quite a while, I felt ashamed of my country. I understand, of course, that this disaster was a mistake. Unfortunately, it’s the kind of mishap far more likely to occur after what I call Biden’s blunder.

There are two separate issues involved in that blunder; 1. Whether the US should have withdrawn from Afghanistan at all, and 2. The manner in which it executed that withdrawal. Let’s take them one at a time.

I admit to straddling the fence on issue number one. The sole purpose of invading Afghanistan, we were told in 2001, was to neutralize it as a breeding ground for international Jihadi terrorists such as al-Qaeda that had wrought 9-11, the 20th anniversary of which Americans will observe this weekend. I believe it’s a misnomer to call America’s two-decade presence there a “forever war”–what it evolved into was more like a “forever occupation” that held the Taliban at bay and prevented any American combat deaths in its final 18 months. Not unlike the long-term occupations with which US history is rife, including those of Japan, Germany, South Korea and, yes, the Philippines.

So, have we achieved that original goal in Afghanistan? Recent events—especially the airport attack comprising one of the bloodiest days there in memory—would seem to show that we haven’t. Which leaves us, after two decades of American effort, with pretty much what we faced in 2001.

No, wait; the Taliban—in no small degree thanks to America—is far stronger today than it was back then. And so we come to issue number two: the manner in which the United States orchestrated its ill-planned retreat. Putting aside, for the moment, the obvious question of timing—i.e. that the withdrawal happened in summer during which the Taliban is best prepared to fight—as well as the lack of forewarning, premature closure of a well-fortified American military airport, and the unfortunate abandonment of 200 US citizens as well as thousands of their Afghan allies, how is it that the Taliban is now better equipped than ever before?

The answer is as simple as it is obvious; because America, in its haste to retreat, left behind billions of dollars’ worth of weapons and equipment. “Congratulations to Afghanistan,” a Taliban spokesman told reporters after the last American soldier had boarded the last American plane. “This victory belongs to us all.”

The Biden administration has made much of the Taliban’s expressed desire to achieve peace with the world and stem the country’s export of international terrorism. The irony is that, should that goal prove as elusive as now seems likely, fighting would-be terrorists from outside will be far messier than attacking them from within. Hence the increased likelihood of tragedies like the one that felled Ahmadi and his children.

“America is the killer of Muslims in every place and every time,” a relative declared. “I hope that all Islamic countries unite in their view that America is a criminal.”

A colleague attending the family’s funeral had just one thing to add: “We’re now much more afraid of [American] drones than we are of the Taliban.”

That indeed may be the most profound tragedy of all.

Sign up here to receive “Expat Eye” weekly by email

David Haldane’s latest book is a short-story collection called “Jenny on the Street.” A former staff writer at the Los Angeles Times, where he shared in a 1992 Pulitzer for coverage of the LA riots, Haldane is an award-winning American journalist, author and broadcaster now dividing his time between homes in Joshua Tree, California, and Northern Mindanao, Philippines, where this column appears weekly in the Mindanao Gold Star Daily.