I couldn’t believe it was real.

As thousands of protestors converged on the US capitol building in Washington, D.C., surprised police scrambled to respond. But it was too little, too late, and what started as a protest quickly spiraled into something resembling an insurrection. The upshot: Congress interrupted, five people dead and the historic second impeachment of President Donald Trump—said to have encouraged the rioters in a speech—just days before the end of his term.

I am no stranger to mass protests. Back in the early 1970s, in fact, I took part in more than a few, many on the unruly streets of the same capitol. Some ended in spasms of violence. Then, as now, people got hurt and lives were crushed on the altar of a political cause.

But there were also important differences. We never breached the walls of the capitol. And we didn’t consider the President our friend. Never have I seen anything quite like what happened in Washington last week. And as I watched it unfolding on TV, an entirely new sense of dread and dismay overcame me. Were we witnessing the second American revolution?

I should probably mention here that I’ve been a Trump supporter. Though too wary to vote for him in 2016, I did so enthusiastically last November because of his considerable presidential achievements. Included on that lengthy list are a sustainable Middle East peace accord that had eluded the world for half a century, American energy independence and, until the pandemic reared its ugly head, a stellar economy that included record-breaking employment for blacks and Hispanics.

The upshot: Trump seemed to be sailing toward easy re-election until early last year. Then COVID-19 showed up and everything went haywire, including the President’s chances.

What happened after that proved more divisive than I thought possible, given how divisive things had already become. Harsh lockdowns with dubious outcomes brought the thriving economy to its knees. And even though virtually no country on the globe had effectively curbed the coronavirus pandemic, Trump’s opponents blamed US failures on him. This in a federalist system wherein the burden of maintaining public health falls on governors rather than presidents. And under which Trump-goaded pharmaceutical companies developed anti-virus vaccines in record time.

All that said, Donald Trump has, to a large extent, served as the instrument of his own demise.

After a contentious election, the President insisted that his victory had been stolen. And though there was allegedly some evidence of fraud—though probably not enough to change the result—Trump and his minions failed to present it convincingly in several courts. Which led to last week’s debacle of a sitting president exhorting his followers in ways that some interpreted as inviting them to riot.

Believe me, I understand the Trumpsters’ frustration. From even before their man’s first day in office, opposing Democrats refused to recognize the legitimacy of his presidency. In one concocted scandal after another, they almost completely tied his hands. And even during his campaign for re-election, Trump had to contend with a mainstream media that consistently refused to tell his side while openly supporting and protecting his opponent.

Ah, but then came that day at the capitol which is hard to forgive or forget.

The Democratic response has been beyond hypocritical. While barely batting an eyelash at several months of destructive and sometimes-fatal violence by left-wing extremists under the umbrella of Black Lives Matter and Antifa, they have been quick to condemn the misbehavior of extremists on the other side. As well, they should. But it is unfortunate that President-elect Joe Biden, who claims to be the champion of national unity, squandered an opportunity to bring it about.

After hearing the violence denounced loudly by both sides, President Trump belatedly distanced himself from it, demanding that the perpetrators be severely punished and promising, finally, to focus on a “smooth transition” of power. At which point, perhaps, we could all have strolled off into the sunset holding hands.

Instead, Biden fanned the flames of partisanship, claiming that “for the past four years we’ve had a president who’s made his contempt for our democracy, our Constitution and the rule of law clear in everything he’s done.” Then he invoked another familiar-but-divisive bugaboo—racism—as the House of Representatives filed, and eventually approved, an article of impeachment.

None of which bodes well for the future.

I suspect that history will record Trump as something of a tragic figure; a man who, while possessing some positive traits, couldn’t suppress his personal demons long enough to allow those traits to rule.

As for me, I am deeply weary of all this rancor and discord.

“Radicalization is now the mainstream of American politics,” Eric Ward, an extremism expert with the Southern Poverty Law Center, recently told the Los Angeles Times. “It’s no longer on the fringes of society.”

Unfortunately, I believe that to be true. 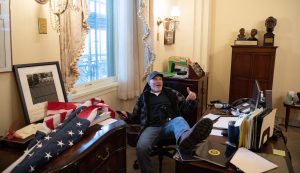 Want to get Expat Eye in Your Mailbox? Sign up here.

David Haldane is an award-winning American journalist, author, and radio broadcaster. His latest book, a short-story collection called “Jenny on the Street,” is due out later this month. A former Los Angeles Times staff writer, Haldane divides his time between homes in Joshua Tree, California, and Surigao City, Philippines. http://www.davidshaldane.com.