I have always had mixed feelings about Halloween. On the one hand, of course, it’s fun to see little witches and goblins asking for treats at your door. On the other, the holiday has, over the years, become increasingly commercialized. And in the United States, at least, it seems to have evolved into something of an excuse for adults to dress up in skimpy costumes and consume large amounts of alcohol with their friends.

Here in the Philippines, the story is somewhat different; while most people, even in the provinces, have certainly heard of the holiday, its customs have not yet taken root. So this year my sweet and generous wife decided to do her bit to change all that.

First, a bit of background. When Ivy initially arrived in the U.S. as my fiancé in 2008, she knew very little about Halloween. Wanting to be a good wife and loyal American, however, she took right to it. We quickly formed the habit of observing the holiday annually, mostly by attending costume parties put on by our friends. Later, after most in our circle, including us, became parents, those parties evolved into elaborate affairs involving door-to-door trick-or-treating with the kids. In fact, Ivy enjoyed it so much that she kept all her costumes.

Ok, fast forward to 2018; now we’re in the Philippines about to experience our first Halloween abroad. Needless to say that in Surigao, where we live, there aren’t a whole lot of parties going on. So Ivy comes up with an idea of her own; why not bring Halloween to the province? More specifically, to Caridad; the tiny thatched-roof village on Siargao Island where she was born and much of her family still resides. 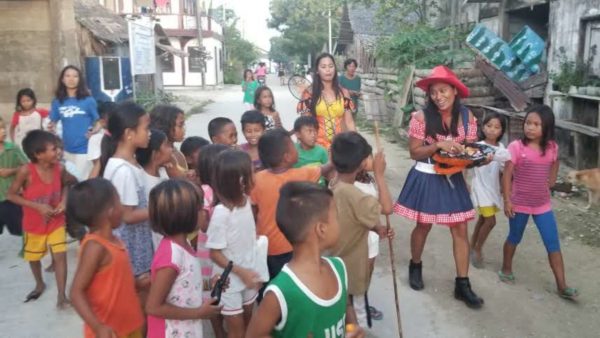 The two-hour boat ride over is uneventful, except for the novelty of dragging along a large bag of slightly-used Halloween costumes. To make a long story short, Ivy’s relatives love the idea and so, in no time flat, are decked out as various entities including a bumblebee, cowgirl, and Spiderman. I am invited along as the expedition’s official photographer. Oh, and there’s one small twist: instead of knocking on doors asking for candy, this troupe of oddly-dressed vagabonds will be distributing it by the plateful to the barangay’s children.

And their numbers do not disappoint. At first, of course, one can see a certain amount of puzzlement and confusion on their young faces; what on earth, they are clearly wondering, are these weird strangely-dressed adults doing in our village? Ah, but then they realize that there’s sugar involved. And as the word quickly spreads, so does the excitement.

“Ate Ivy, Ate Ivy!” some yell, holding out their hands as the candy begins to fly. And within minutes, I swear, a crowd of at least fifty young’uns is following us through the streets as we make our tour of the barangay. Needless to say, the candy supply doesn’t last long but inspires lots of smiles.

Which is exactly what I didn’t expect to see the next day when we did what most Filipinos do this time of year; trekked to the local cemetery to visit the graves of dead relatives in observance of All Souls Day.

Oh, there were some somber moments, to be sure. As when the priest performed mass, sprinkling holy water on the graves. And the family performed its own prayer at the tomb of Ivy’s grandfather. There was also evidence of care, as children lit candles to honor the dead and a young man painstakingly repainted the inscription on a departed relative’s grave.

But – and this is what surprised me – the overall feeling was not one of sadness or regret, but of celebration. It seemed more like a family reunion, with lots of laughs and stories about the much-loved relations of the past. Various family groups sat together under makeshift shelters sharing jokes and the latest gossip. And at least one celebrant appeared to be under the influence of, well, let’s just say more than a little alcohol.

Hmm, now that I think of it, not that different from a typical Halloween party back home. Minus the skimpy costumes.