The thing that changed my mood, I think, was the man swinging a stick rifle with the coconut on his head.

Or maybe it was the group of women frantically massaging a phallic bar of fast-melting ice. Whatever it was, I came home from my first barangay Christmas party last night with an entirely new take on the day that Christ was born.

The truth is that I’ve never been big on Christmas parties. It’s not just that I’m Jewish. My problem with holiday gatherings, in general, is that too often they are stilted affairs imposing forced enactments of fun.

Not in the Philippines. It didn’t hurt, of course, that the barangay captain – spotting us hovering timidly at the entrance of the open-air gymnasium in which the event was held – immediately came over to introduce himself and usher us to the head table next to him. Nor was his gift of a large bottle of spirits unappreciated.

Ivy says she thinks all that was designed to encourage our financial participation in next year’s event. The thing is, though, that I don’t care; what I saw in that gymnasium was a colorful celebration of life and community brimming from start to finish with frolicking fabulous fun.

First came the games; everything from crazy dance fests pitting block against the block to the familiar sack races and more rarified contests involving the coconut-hobbled warriors and screaming ice-crazed wives. There were several synchronized dance performances by local groups who had obviously practiced for their presentations. One group that obviously hadn’t was the uniformed barangay police. And, finally, there was the complete abandonment of all order in favor of general disco madness led off by none other than yours truly and his lovely wife.

“Pssst,” Ivy said, waking me from an indulgent stupor theretofore unpenetrated by human words. “They want us to dance; first us, then everybody else.”

“But….,” I objected as she dragged me onto the dance floor. Suddenly we were dancing with the whole town looking on. And that’s when it struck me that this was, indeed, our new hometown. 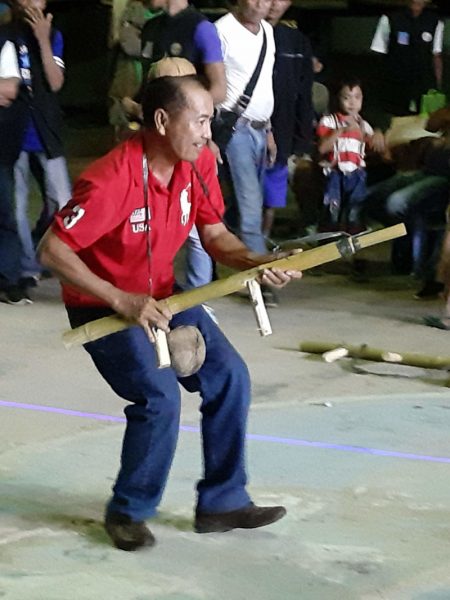 In fact, hometown is what it was all about. It’s like this: virtually everyone in the world longs for the intimacy and familiarity that comes with living in a small community. But the trend in most places is exactly the opposite; more and more people inhabiting larger and larger cities growing increasingly impersonal with each passing day. The Philippines has solved the problem ingeniously by assigning every person in every city to what essentially amounts to a small neighboring town, namely their barangay. Thus every Filipino has a real hometown.

That was the perspective that overcame me last night as I watched the faces all around me lost in excitement and fun. Like any small town, our barangay has its own cast of characters including the town drunk, teenage dreamboat, and local parish president whose participation in the Christmas gala included publicly reminding partiers to attend mass at 4 a.m. The town also, of course, has its own legends and dramas, such as the foreigner who drunkenly threatened people with guns and the guy who recently stole a motorcycle without the key to start it.

Both ended up in the town pokey as guests of the bad-dancing cops.