It’s happened too many times to be accidental.

The first instance involved a lovely married couple we hired to, respectively, drive our son to school and clean our house. The deal: we would provide room and board plus a salary deemed adequate with, of course, weekends off.

For a few weeks everything went swimmingly; his driving was professional, and she proved to be a first-rate cleaner and cook. Then they asked for an advance, which they said they needed to buy rice. We gave it to them. Again and again. Until, finally, we put our collective foot down and told them no more debt, except for emergencies.

The next week she quit, offering what sounded like a lame excuse. And a week later, her husband simply stopped coming to work. Oh well, I thought, guess they didn’t really need those jobs, though it irked me that he hadn’t given any notice. Then I met our next pair of live-in helpers.

They were both young women – one about seventeen, the other in her early twenties – who, we’d been led to believe, were anxious for an income. So we gave them the same deal, hiring them as live-in yayas.

The problems began almost immediately when we noticed the younger girl flirting with a group of construction workers in our yard instead of doing her work. Later, she never seemed to be around when needed and, even when she was, required close supervision on every task. So we raised no objections when she informed us that she had the sniffles and required some time off. Nor did my wife hesitate before texting her the next day with the news that she need not return. The other girl lasted another two weeks, after which she too simply stopped showing up. And so we were ready to try yet again.

Our third hire was the wife of a man who’d done some odd jobs for us, a woman in her early forties. She was actually quite good at cooking and cleaning, regularly putting in full days of work. But she too asked for advances, which my wife – against her own better judgment – freely gave. By the time this one stopped showing up barely a month later, she was 2000 pesos in the hole.

Which brings us to the central question posed by this little essay; what the heck is going on? Is the salary we offer less than expected; and, if so, why has no one asked for more? Do they dislike the curtains we provide, or perhaps find the menu too lean? The bigger issue, of course, is as obvious as the giant at a midgets’ convention; in a rural province where cash is hard to come by, why don’t they just come on by?

As an American, this greatly surprised me. Back home, Filipinos have a reputation for being, by far, the best, most capable, most loyal and hardest working employees available. Many years ago, long before I’d ever been to the Philippines or dreamed of marrying one of its citizens, I hired a Filipina to care for my ailing father. She didn’t disappoint, attending him with gentle devotion – even love – as he painfully navigated his last days on earth.

My own wife, arriving Stateside in 2008, also did remarkably well. Armed with a degree in medical technology from Butuan Doctor’s College, she plowed her way into a lucrative clinical laboratory career that, though interrupted by her return to the Philippines a decade later, could be resurrected and pursued any time.

So what makes the locals so different? Why do they flee at the drop of a peso while their brethren abroad show so much grit? My wife, for one, attributes it to something I have long suspected; their immersion in a culture of poverty. What it boils down to, as our construction foreman once explained after his crew went missing for several days, is this: in the Philippines, if you have rice in your pot – even just a little – you get to stay home while if you don’t, well, you must go to work. Simple as that. So, ironically, our pay advances may have been encouraging employees to stay home and eat rice.

The Philippines isn’t the only place where this happens, of course; I suspect that many countries contain populations whose future seems so bleak that they feel no need to plan for it. Here on these islands, the problem is exacerbated by the fact that those who do have some vision of a better future – or can muster one up – often end up working abroad giving their fellow Filipinos such a good name.

So where does all this leave us?

Basically in an overly large house with a pregnant wife who can barely waddle into the kitchen and an inept husband who barely knows where it is. Not to worry, though; the waddling wife says she soon will be seeking paid help.

Only one stipulation: the payment will be for work already performed, no exceptions. 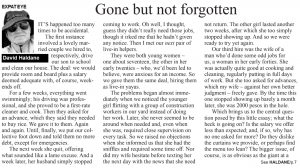