It’s not an easy place to find. You drive a long time, stop for directions, then drive some more. Finally, at the end of what seems like an unreasonably circuitous route, you arrive at a narrow street in what looks like a middle-class neighborhood. Then clamor out to sign the guestbook at a table manned by officers of the Philippine National Police.

He doesn’t respond, just grunts and points his nose towards something down the street. Finally, after a long hike in that direction, you find what you came to see; a modest house watched by a lone security guard dressed in plain clothes. What really gets your attention, though, is the life-sized cardboard cutout standing in the driveway smiling in your direction. This must be it, you think, the President’s house.

If you live in the USA, as I have for a long time and will for a little bit longer, you don’t hear many good things about Rodrigo Duterte. “Rise of the Strongman,” screamed a recent Time Magazine cover featuring the Philippine president’s likeness next to that of Russian President Vladimir Putin. “The Punisher,” announced another, under Duterte’s picture alone.

Frankly, those aren’t even the most lurid headlines frequenting American news outlets these days. And when I tell friends of my plan to move to the Philippines, they often respond with “yeah, but aren’t you worried about that dangerous president?”

Being married to a woman from Mindanao, of course, I am acutely aware of the story’s other side. Ivy and her family pretty much adore Duterte. And in our frequent visits to the country’s southernmost regions, it’s been difficult to find a Filipino who doesn’t feel the same way. Explaining this to Americans who’ve never been there, however, can sometimes prove quite daunting. And so, we had set out for Davao to see for ourselves from whence this President came; is he really a man of the people as he claims, I wondered, or is that just a well-crafted image?

Standing near what looked like a gated carport, I took in the scene. The house seemed pleasant enough, with green plastic overhangs and potted palm plants out front. What struck me more, though, was the light security; just the single young guard standing there holding a mysterious-looking satchel. The President’s family still lives here, he assured us, and Duterte himself comes home every weekend.

And then it struck me; can you imagine an American president or his loved ones living anywhere in such unpretentious circumstances? I don’t know the ins-and-outs of Duterte’s security but, apparently, he’s not too worried about it and neither is his family. Could that be because he really is a “man of the people” much-beloved by his community?

Pondering the possible answer to that and a host of other questions, I posed for pictures with my wife flanking Duterte’s lifelike cutout. When we posted them on Facebook a few weeks later, the reactions were amusing. My favorites: “Don’t piss him off!” and “You could easily take him down.”

My response to both: not bloody likely! 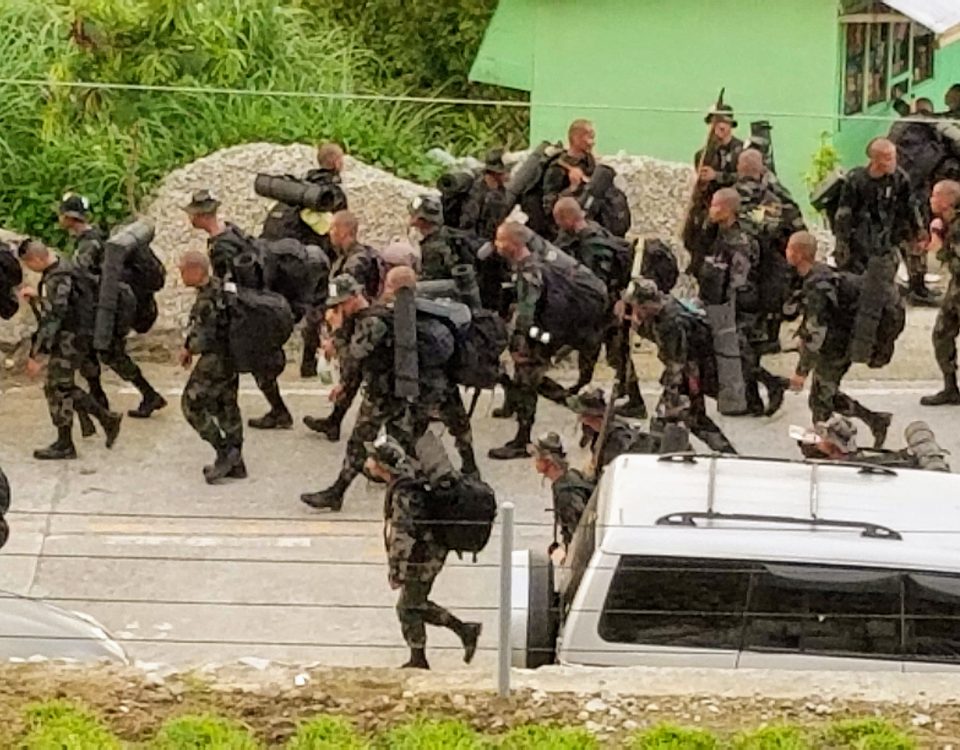